We recently wrote about the euro and the spread in interest rates between the German and Italian 10-yr government bonds. See “The Euro, the Dollar, the Bund–Italy Spread” (https://www.cumber.com/market-commentary/euro-dollar-bund-italy-spread).

A friend of years and a now retired central banker with a distinguished career in economics sent us a note and pointed out an error we’d made in briefly recounting the history of the euro. He is correct, so we must amend the original commentary. We thank Marc-Olivier Strauss-Kahn for calling the error to our attention.

The original structure for the euro started way before the euro with the founding members of the European Economic Community (Belgium, Germany, France, Italy, Luxembourg, the Netherlands). The EEC originated in the Treaty of Rome in 1957 (“Treaty of Rome,” https://www.europarl.europa.eu/about-parliament/en/in-the-past/the-parliament-and-the-treaties/treaty-of-rome) and was part of the evolution of the European Union, established in 1992 by the Maastricht Treaty, which ultimately led to launch of the euro (“Maastricht Treaty,” https://en.wikipedia.org/wiki/Maastricht_Treaty)

When the euro was launched in 1999,  11 of 12 member countries in the EU, including the original six EEC countries, agreed to adopt the new common currency (“The euro: the birth of a new currency,” https://www.ecb.europa.eu/press/key/date/1999/html/sp990521.en.html). Greece then joined and that made twelve (“Introducing the Euro,” https://www1.oanda.com/currency/help/euro). The story about Greece’s restatement of its economic data after admission is cited in our original piece.  They did restate data after their admission and irate members couldn’t do anything about it.  I heard the private protests with my own ears.

There is backup for the assertion we made that “dark money” played a role in the pricing of the euro-dollar exchange rate. In Invest in Europe Now! Why Europe's Markets Will Outperform the US in the Coming Years, the book I co-authored with Vincenzo Sciarretta, I cited this NBER paper on that subject: “Why Has the Euro Been Falling? An Investigation into the Determinants of the Exchange Rate” (https://www.nber.org/papers/w8352). If you have the book, you can find the discussion on pages 8–12. An excerpt follows: 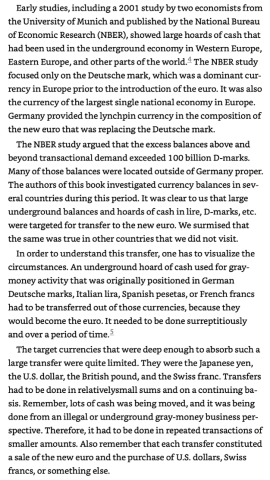 (Invest in Europe Now!: Why Europe's Markets Will Outperform the US in the Coming Years, https://www.amazon.com/Invest-Europe-Now-Europes-Outperform/dp/0470547014/)

I visited Europe several times during that formative period and saw evidence of cash-hoard conversion in certain countries, including Italy. I wrote about it at the time in a series of commentaries about Italy. An excerpt from one installment in that series, “Italy 4: The Mafia,” published June 27, 2001, addresses the challenge that the introduction of the euro posed for organized crime:

A) The conversion of lira and other currencies is causing a problem for organized crime. Vast amounts of currency will be invalid by the middle of next year. The conversion to euro has specific timeframes. That means organized crime has to find a way to either launder money quickly or convert it.

B) The euro will not be available in paper form until January 1, 2002 — and then there will only be a few months of conversion time before the old currencies are completely withdrawn. Organized crime has a difficult task because large currency transactions would call attention to the criminal. Several economists speculate that the way they are choosing to get around this problem is to convert those currencies to the US dollar. Intuitively, that makes a lot of sense. Could it explain the continuing strength in the dollar at a time when the dollar seems overvalued against the euro?

C) We should know the answer to this question within a year when the euro has completed its transition from a virtual to a real currency. We think the answer is "yes," and that means the euro should start to strengthen as this one-time transition is completed.

D) An additional technical aspect of the currency conversion involves the denomination of bills. The European Central Bank intends to issue a 500-euro-denominated note. The largest size mass circulated US dollar denomination is the $100 bill. Some experts speculate that organized crime will favor the larger 500-euro bill over the $100 because it will allow them to make cash payments in smaller containers. If this speculation proves accurate, a potential worldwide shift of billions of dollars into euros is possible with the transfers starting early next year. Presently, those $100s which are printed by our Federal Reserve amount to an interest-free loan to the US government from the worldwide holders of that paper. Substitution of the euro would mean that the interest-free loan will be to the European Central Bank and that our Fed will have to offset this shift out of our currency.

There’s the history as we see it.  Let’s move to other issues.

Nearly a quarter century ago, I met Marc-Olivier at a lunch in Paris when a small GIC delegation was to present economic outlook forecasts for the United States. That was right after the euro was launched. We have kept in touch ever since.

There was an initial credibility issue with the euro, as its many detractors were highly vocal and critical. But the euro policy makers persisted in their support for this new currency as they developed the monetary policy for a new currency.  I was among the few defenders of the euro at its formative stage.  Why?  I believed that the motivation of the leaders then in Europe was to attempt to stop war after a thousand years of killing each other. That is why they knew that the new euro currency had to be proven stable and trusted.  Hence, they had to maintain a strong euro monetary policy at the time.

Marc-Olivier also noted both the response in global markets to the Great Financial Crisis (GFC) in the US and the bursting of the tech stock bubble. Policymakers in Europe had to ignore the tech stock bubble for the reasons we have discussed above.  The GFC was different and they succumbed to the worldwide pressures to developing easing strategies.  They (European Central Bank) are still dealing with the aftermath today.  So are we in the US as our Fed tries to normalize things with quantitative tightening (QT) and raising interest rates simultaneously.

There are other influences, as well, that were not listed in our recent commentary. Note that, during the periods mentioned (the early years before the GFC), the spread between the German and Italian government bond yields was tight. Our discussion showed the spread from inception, and any reader can pencil in the dates of events and see the impact on the spread.

We thank Marc-Olivier for taking the time to send us his critique. We wish him safe travels. Maybe we can find a way to break bread together again in Paris or New York or elsewhere.