We thank Jake Hanley and his company colleagues at Teucrium for permission to share this excellent commentary with our readers. Teucrium (https://teucrium.com) is in the ETF business and specializes in grains. We will add just one note to Jake’s analysis since we sincerely believe that Putin is untrustworthy and deceptive in every move he makes. His so-called grain transit deal allows Russia to map routes through minefields. That exposes Ukraine to a military opportunity that Russia currently doesn’t have. In our opinion, Putin is responsible for the worldwide famine currently spreading on several continents; he is using mass hunger as a weapon of war. Russia has a history of doing this: Josef Stalin starved and killed millions of people, including millions who died during the famine in Ukraine. 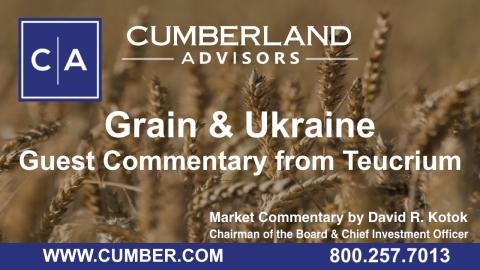 18 million metric tons of grain is a lot of grain. Right now, that grain is stuck.

The Russian Black Sea blockade has left critical grain supplies stranded in Ukrainian ports and storage facilities. Ukraine has been able to move some grain westward via truck and rail routes. Yet, existing land-based infrastructure cannot support the significant volume of grain that Ukraine needs to ship. And Ukraine needs to ship that grain soon to free up storage space for the winter wheat crop currently being harvested.

The Istanbul Grain Accords — The Deal in Question

After months of negotiations, there is finally some good news. A deal has been struck to allow for shipping to resume in the Black Sea. While the full details of the arrangement remain unclear as of this moment, it appears that both Russia and Ukraine have agreed to demine parts of the Black Sea and have promised to allow safe passage for grain barges and cargo vessels.

Speaking from Cairo on July 24th, Russian Foreign Minister Sergey Lavrov stated that “… the Ukrainians will clear of mines their territorial waters and allow ships to leave, and during their passage in the open sea, Russia and Turkey will be ensuring their safety with their naval forces.”[1]
The promised security should lead to lower Black Sea shipping and insurance costs which would immediately benefit Russia. While Ukrainians are busy demining their ports, the Russians are likely to get a head start exporting their own enormous supplies of wheat out of the region.

Still, the selling in wheat futures signals to us that the trade believes Ukrainian wheat will soon be available via the Black Sea as well. Recent reporting suggests that Ukrainian grain shipments could begin within mere weeks. That timeline may be too optimistic considering structural damage to port infrastructure, the logistics of procuring ships, and coordinating Turkish and Russian security oversight.

Furthermore, we at Teucrium, generally an optimistic bunch, remain skeptical that any Ukrainian grain will ship via the Black Sea. Our thinking is based on the premise that Russia wants to win the War and control vital territory and resources. Why else would they be risking blood and treasure?

Assuming Russia’s strategic goal is to gain control of Eastern Ukraine, a territory accounting for nearly 30% of Ukraine’s annual grain production, there is a big question that we have been unable to answer: How would abiding by the agreement help Russia move closer to achieving their strategic goals?

Ukraine needs the current deal more than Russia does, and Russia will not allow any Ukrainian grain to ship via the Black Sea unless it is in Russia’s interest to do so.

Russia is already in control of the Black Sea. However, Russia does not yet directly control Ukrainian grain. The grain is firmly in Ukrainian hands located in storage facilities and port areas controlled by the Ukrainians. Given reports of Russians stealing Ukrainian grain in other parts of the country, there are concerns that Russia may be looking for an opportunity to seize the grain in the eastern ports as well.

Additionally, the demining of Ukrainian waters may create an opportunity for Russian naval forces to advance closer to key Ukrainian ports, such as Odessa. The waters surrounding Odessa are reportedly within range of Ukrainian missiles which may keep Russian ships at bay, but the entire port is within range of Russian missiles. Russia recently demonstrated its capability to hit Odessa, launching a missile attack the day after the agreement was signed. The attack immediately called into question Russia’s commitment to the terms of the deal. Afterall, it is exceedingly difficult to operate a port with missiles falling out of the sky.

From a high level, ’22–’23 global wheat consumption is expected to exceed wheat production resulting in a 4% year-over-year decline in ending stocks. [2] In other words, global wheat supplies are expected to shrink this year.

Front-month wheat futures prices spiked at the onset of the war due to the uncertainty of the availability of Ukrainian wheat. Prices are now back below pre-war levels. It appears markets are pricing in more certainty pertaining to both Russian and Ukrainian wheat availability.

Wheat is still trading in a wartime market. Significant uncertainties remain. We expect continued volatility. With the trade appearing to price in the successful re-opening of Ukrainian seaside ports, the risk may be to the upside, if any of the parties (particularly Russia), fail to uphold their respective ends of the bargain.

[1] https://tass.com/russia/1484153
[2] USDA July WASDE Report. Ending Stocks (also called carry-out): the amount of wheat that will be available at the end of the crop year given the estimated or actual beginning stocks, production and usage.

Again, we thank Jake Hanley and his company colleagues at Teucrium for allowing us to share this with our audience.