Yahoo Finance ran this story about Russia and default: “Russia's debt default will be one of the hardest in history to resolve and could see the US seize the central bank's assets, economist says,” https://finance.yahoo.com/news/russias-debt-default-one-hardest-080000031.html. Bloomberg, Reuters, Wall St. Journal and many other financial news sources have reported this story. 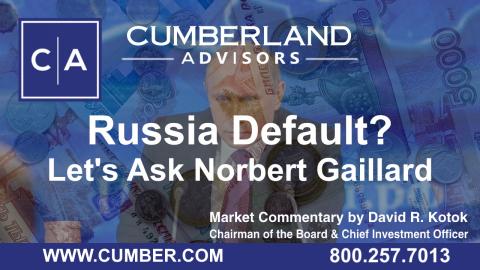 Commenting on the piece and the prospect of a Russian default, Paul Schulte (Schulte Research) wrote from Singapore:

“30-day grace period ends on May 4. The impending Russian debt default is likely to be one of the most difficult in history to resolve and could even lead the US to permanently seize assets from the country's central bank, according to a report from the consultancy Oxford Economics. Russia is facing its first default on its foreign-currency debt since the aftermath of the Bolshevik revolution in 1918. The US Treasury earlier this month blocked Russia from paying $650 million due on two bonds using funds held at American banks. Russia has instead tried to pay in rubles, but credit ratings agencies have said this would constitute a default.”

Paul cited Tatiana Orlova, lead emerging markets economist at Oxford Economics, who reasons that, "Russia's debt crisis will be among the most difficult in history to resolve, since the default has its roots in politics rather than finance." He continued with “Orlova said another problem for bondholders is that Ukraine may lay a claim to Russian assets in international courts to pay for the rebuilding of the country. In that case, investors would have to weigh up whether they want to compete with the Ukrainian government for Russian assets.”

To get some additional thoughts from an expert, we reached out to an acquaintance we met in Paris years ago at a GIC conference at the Banque de France. We have maintained contact with each other over many years.

Norbert Gaillard is a globally recognized expert in sovereign debt, sovereign default, and sovereign bankruptcy. He has two books particularly relevant to this moment: When Sovereigns Go Bankrupt, a Study on Sovereign Risk (https://www.amazon.com/When-Sovereigns-Bankrupt-Sovereign-SpringerBriefs-ebook-dp-B00RZKDT7O/dp/B00RZKDT7O/), published in 2014, and Country Risk: The Bane of Foreign Investors (https://www.amazon.com/Country-Risk-Bane-Foreign-Investors/dp/3030457877), published in 2020.

Norbert has taught at the University of Geneva and has “served as consultant to the IFC, the World Bank, the State of Sonora (Mexico), the OECD, the European Parliament, and various financial services firms” (https://www.norbertgaillard.com). He is also a co-author of an NBER Working Paper, “The End of Gatekeeping: Underwriters and the Quality of Sovereign Bond Markets, 1815–2007,” published in 2010.

Norbert was kind enough to take some time and respond to several questions via email. He has studied the issue of sovereign debt and default in great depth, as one can see.

Kotok: What do you see as an outcome of the Russia default characterization by a major rating agency?

Gaillard: Before all, I think we should admit that the "default" status of Russia is debatable (see point iii below). However, my view is that the credit position and the credibility of Russia are very, very low. As a result, in this point i, I assume that Russia is a "defaulting government."

The ability of a defaulting government to regain credibility in the short/medium term is contingent on various factors.

(i) Paradoxically, a backward-looking factor must be taken into account. A massive downgrade from the investment-grade category to the "default" category within a short period of time (e.g., Russia between February and April 2022) reveals a blatant mis-rating. This should lead investors to be more conservative and reluctant to purchase the country's sovereign bonds in the medium term. (ii) The defaulter must be willing to resolve the debt crisis quickly. Long debt restructuring negotiations are very costly (cf. Argentina since 2001). (iii) The defaulter must demonstrate that it intends to restore not only its credit position but also a favorable business environment (i.e., rule of law, political stability, fiscal credibility, tax attractiveness, etc.). My view is that Russia has failed and will fail this litmus test. The country may become an economic pariah or fall into the Chinese sphere of influence. In either case, Russia is a dangerous bet for Western investors.

Kotok: Is there any precedent for a contractual change in currency clauses by a debtor when made unilaterally?

Gaillard: Unilateral restructurings consisting of operations that convert foreign currency debt into local currency (akin to "forced conversions") are not infrequent. They were observed in the 1930s (e.g., Uruguay and Turkey). More recently, in 1998, Ukraine declared a moratorium on debt service for bearer bonds owned by anonymous entities. Only those entities willing to identify themselves and convert to local currency accounts were eligible for debt repayments. A forced conversion is clearly a form of default: it may involve significant losses if the local currency has depreciated or cannot be easily converted into an international reserve currency.

Kotok: How do you assess the credit default swap pricing of a 99% default risk attached to Russian sovereign debt?

Gaillard: This question is extremely tricky because it entails various financial and legal issues. (i) The US Treasury prohibited Russia from making debt payments with funds subject to US jurisdiction. Sanctions do not preclude payments on Russian sovereign debt, provided Russia uses funds outside of US jurisdiction. This may be a key issue. If Russia is technically [electronically] allowed to repay in USD with funds outside of US jurisdiction, Moscow can and must repay to avert a default. If Russia is technically [electronically] prevented from repaying in USD (regardless of the jurisdictional status of the funds used), Moscow might legitimately affirm that it is not in default. Yet, in the latter scenario, can't we imagine investors' envoys collecting suitcases stuffed full of cash given by the Russian central bank?! I think that if Russia really wants to repay in USD, it can do so. (ii) Russia may go to court and argue that it is prevented from repaying its debt. So we must examine governing law clauses. I guess Russian debt contracts are governed and enforced in accordance with English and NY laws, which could suggest that Russia is likely to lose the case. (iii) A Russian default is very likely but creditors may have a claim on Russian gold subject to US jurisdiction. This implies that recovery rates for investors could be high. As a matter of fact, this default (or quasi-default) may be disastrous for Russia: the country will lose its credibility but it will not stop financial flows to the West! (iv) Last but not least: the "universal set" of "credit events" (as defined by the ISDA) does not match exactly the "universal set" of "defaults" (as defined by credit rating agencies)... This involves that the CDS pricing of a 99% default risk is really uncertain! In fact, we must scrutinize what ISDA committee members are going to say.

Kotok: Do you have any views about a contagion event because of Russian default?

Gaillard: Contagion effects can already be observed, but they are driven by the Russo-Ukrainian war, not by the Russian default. Contagion is spreading through traditional economic and trade channels rather than financial channels. The countries most affected are Caucasian economies, Belarus, and Moldova. However, there is a risk of financial contagion in the next weeks and months. Banks in Caucasian and Baltic states and also in Turkey may be exposed to spillover effects. Central banks (including the ECB) should be prepared to intervene.
_______

We thank Norbert for his views and for permission to share them with our readers. He is clearly a very busy person these days, but we hope to see him in the autumn if he makes a trip to the US.