We’re talking bonds and the Fed today. Here are two links and a rant.

The first link is the May 6 video by my colleague of 20-plus years, John Mousseau, who happens to be the Director of Fixed Income as well as President and CEO at Cumberland. Here’s the link:  https://youtu.be/c9eQ2z121bg.

John has a single great graphic he uses to explain “taxable equivalent yields.” 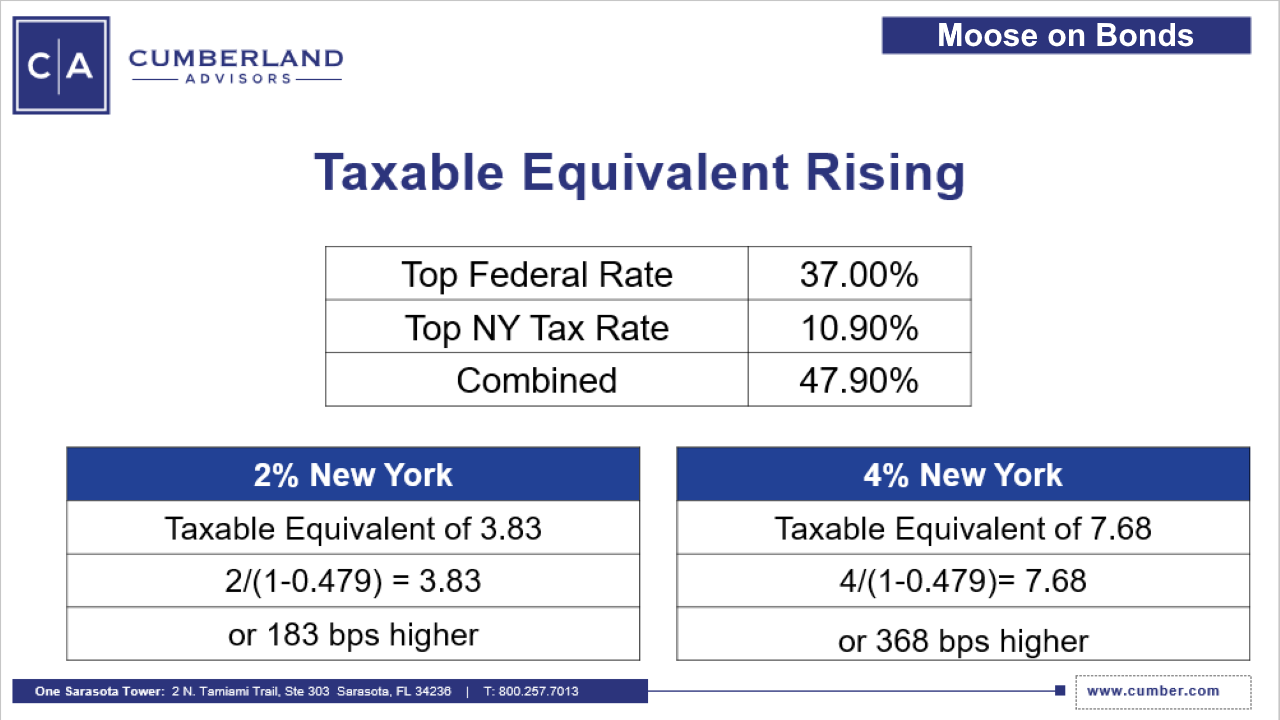 He gives a theoretical example and then backs it up with a live trade. The whole teaching lesson will take you about four minutes. Note that anyone interested in more of this discussion can email me, and I will forward the request to the right party to send detailed information. Needless to say – but I will say it – we’re seizing these types of opportunities right now at Cumberland for our separately managed account clients who allocate investment money to this tax-free Muni space.

The second link is to a one-hour Spotify. We recommend it.

The host is Jeremy Schwartz, CFA who is the Global Chief Investment Officer, WisdomTree and the show is his weekly Behind the Markets podcast interview. When you listen you will hear a few opening comments by Jeremy Siegel, Professor of Finance at the Wharton School and WisdomTree's Senior Investment Strategy Advisor; and, then, Jeremy Schwartz has a detailed interview with Tom Tzitzouris, Managing Director and Head of Fixed Income Research at Strategas. Tom is discussing various aspects of the bond market and Fed policy and the way interest rate changes are unfolding.

During the interview, you will hear Jeremy Schwartz ask Tom a question about how the Fed will deal with its mortgage portfolio as it downsizes the balance the Fed’s sheet. Jeremy notes that the question comes from “another bond manager.” Let me disclose that the question came from me.

Tom gives his views, and please note that Tom and I did not collaborate or discuss this in any way. We are in full agreement, and he says it very well. Jeremy guides the conversation perfectly.

Listeners can hear a calm, thorough analysis about the mechanics and the unfolding of the Fed’s balanced sheet retrenchment, or what is otherwise known as QT (quantitative tightening). We encourage readers to take the time to listen to the full podcast. In my opinion, Jeremy conducts this interview expertly with his sequence of questions. Tom has outlined the policy analysis in a thoughtful, carefully explained way.

Here’s the link and the information needed to listen to the podcast: https://open.spotify.com/episode/2yrWYhVFxGzEunyui92Et4

Now let me get to item number three, which is my personal rant.

I’m watching talking heads and pundits troll the Fed. “Woulda, coulda, shoulda” goes on and on. In my opinion, the targeting of the Fed by some nasty trolls in media has become obnoxious and distracting.

I’ve witnessed calling names and personal attacks about Federal Reserve Bank presidents or Fed governors. It gains nothing. Complaining that the Fed has too many academics because of its oft-cited “400 PhD economists” or grumbling that Fed leaders have too little real-world experience because of their long professional working histories inside the Fed have become overworked themes.

The perpetrators of this incessant barrage seem to avoid explaining policy. They throw stones and call names but they do not give citations for examples of policy options. They do not offer thoughtful scenarios for monetary policy. If you want to hear what a policy explanation sounds like, listen to Tom’s interview. If you want to hear how to apply an investment decision in the bond market, listen to John’s example of a real live trade. John and Tom are not trolling. They are taking a position and explaining it.

If you want to hear the ongoing static from armchair experts second-guessing what the Fed should have done and when they should have done it, listen to the noise, which is abundant. That is like replaying the Kentucky Derby on Monday and saying what the jockey should have done when he was making the far turn toward the home stretch. The jockey was in the middle of the race and had to make decisions in real time. The jockey didn’t have the luxury of Monday-morning analysis. On Saturday, the jockey surprised everyone with an 80-1 victory. By the way, he had a lot of help from the horse!

We had a once-in-a-hundred-years pandemic shock. The Fed responded robustly. The programmatic response clearly worked, and the downdraft in the market and the economy lasted a few very ugly months; it has since abated and the economy has partially recovered. The United States played out the modern equivalent of the entire Great Depression, only it took three months instead of four years. That pandemic shock resulted in massive negative shifts in aggregate demand and in aggregate supply.


That was a double whammy.

We now have a second double whammy on top of the first one. First, the pandemic is not over, as much as we would like it to be; and, secondly, a vicious shooting war drags on, while the world applies sanctions and payment restrictions in hopes of deterring the aggressor. The entire global array of commerce, economics, forms of money, currencies and debt markets is collectively facing the largest uncertainty premium anyone can imagine. The Fed did not cause any of these items.

The Fed is trying to navigate its policymaking in real time, just like the jockey in the middle of the race. The Fed is trying to thread the horse through the thundering pack and into the lead. The Fed wants to achieve enough tightening of monetary policy to dampen inflationary impulses, but it doesn’t want to repeat a recession shock like the one we had just two years ago. And like the horse and jockey, the Fed has to ignore the yelling and screaming from the fans and broadcasters because it must concentrate on the business at hand.

So the critics who constantly throw barbs at the Fed about what they should have done are engaged in a one-sided media game of outshouting each other. Predict five Fed rate hikes when the consensus is predicting four, and you get the headline. Then the next pundit predicts six, so he or she becomes the outlier and gets the headline. And so it goes.

Where is the thoughtful discussion about what the true neutral interest rate is? There is discussion which leads to a range of from 3% to 6%. Really? And, do you seek a neutral rate in the short term or the medium term? Does the 2000-year history of a declining real neutral rate that started at 10% during the Roman empire period and was approaching zero in the United States before Covid count? And why was the neutral real interest rate approaching zero? There are very valid reasons. And there are serious researched examples of why the neutral real interest rate will be lower than expected as the pandemic and war shock era passes.

There is a lot to deal with here. And the shouting match among those who troll the Fed doesn’t help a single thinking person to absorb, digest, and analyze these profound questions in the midst of an aggregate demand shock and an aggregate supply shock when each of those shocks is difficult to estimate in terms of its duration and degree of magnitude.

Thank you for letting me add a personal perspective to the two important videos above.

For those who want to learn about the neutral rate, start with Knut Wicksell’s book first published in German more than a century ago, Interest and Prices: A Study of the Causes Regulating the Value of Money. And then continue your study with some of the excellent research papers on this subject. You can find those papers within the Federal Reserve System, and they are written by some of the very economists that are being castigated by sometimes vicious Fed critics. Here are two key working papers:

Here’s one current take on the neutral (natural) rate of interest: “Powell wants to get rates closer to neutral. But what’s neutral? Think between 5% and 6%, former top Fed staffer says,” https://www.marketwatch.com/story/powell-wants-to-get-closer-to-neutral-but-whats-that-think-between-5-and-6-former-top-fed-staffer-says-11651566417.

The headline focuses on the highest estimate in the range of 6% high but the article shows how it may be a 3% low. In fact, no one knows where the neutral rate is these days because of the nature of the aggregate demand shock and the simultaneous aggregate supply shock.

Throughout history there are numerous examples of an aggregate demand shock and an aggregate supply shock when a pandemic and war were coincident. In every case, the combination has subsequently resulted in the medium term-decline of the real neutral rate. Check the San Francisco Fed working paper 2020-09 for the research.

So, in high-uncertainty periods like the present one, why should the Fed be pushed by trolls to reach for the highest estimate of the neutral rate? Why not the lowest? Why not just admit that we don’t know and accept the need to move slowly and deliberately and with as much transparency as possible?

Chair Powell and colleagues are to be praised for their patience in managing this extraordinary period with limited predictability and attempted transparency. The shouting from talking heads doesn’t help matters. None of the detractors offer detailed arguments about the ranges of the estimate of the neutral rate. They don’t know what the neutral rate is, and neither do I — nor does anyone else.

We are all just guessing.

This Fed has managed a process through a Covid shock with considerable success, in my view. Think about it. How many banks failed in 2020? 2021? Can you name any? Did you see any Lehman moments? We’re in a global sanction and payments war. Have you seen any contagion effects? Yes in some countries. No, in the United States and no in the US dollar payments system.

What would you have done at the Fed if you were sitting in the “room where it happens” last summer and thinking about changing interest rates while the inflation rate was still under 2% and the Delta surge was unfolding around you? Would you have voted to raise rates into rising deaths and hospitalizations with another demand shock and supply shock simultaneously underway? Or would you have said, “Let’s wait until the next meeting”?

I’m a defender of the Fed. I think they are trying to be transparent, and they are trying to engage market agents with as much information as they are able to share. And they are doing so while the banking and payments systems of the United States are in the front line in a worldwide confrontation with a murderous adversary in Moscow.

We agree with our colleague John Mousseau. There is opportunity right now, and we are seizing it.

And we agree with Tom Tzitzouris of Strategas on his calm analytics and his take on how the Fed’s policy will probably unfold.

Stay tuned, more is coming on demand shocks and supply shocks and what the natural rate of interest may be.