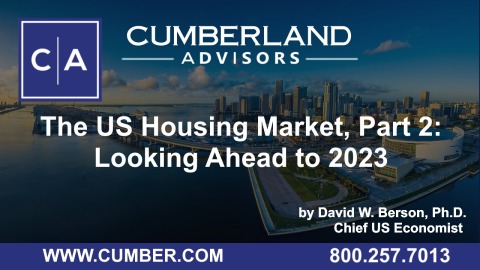 The main determinants of housing demand in the short run are the level and direction of mortgage rates and the strength of the job market. Over the longer term, demographics play a major role; but they tend not to change much from year to year and so won’t be a part of the discussion for housing demand this year.

The job market has been remarkably strong in the recovery from the Covid shutdowns, with nonfarm payroll changes averaging gains of 726,000 per month since they bottomed in April 2020. Even over the past six months, the increases have averaged 307,000 – well over the long-run median gain of nearly 190,000 per month. While the strong job market (combined with the unusual work-location changes brought on by Covid) has played a significant supporting role for housing demand over the past 30+ months, job gains are inexorably slowing and will offer less support going forward – even if the economy can avoid a recession. But if a recession occurs at some point this year, job growth will turn negative (even in a modest downturn), and the job market will dampen housing demand.

Despite solid job gains over 2022, housing demand fell sharply because of rising mortgage rates and the resulting negative impact on affordability (especially when combined with lofty house prices). Forecasting interest rates is fraught with uncertainty, but the current level of 30-year fixed-rate mortgages (FRMs) is around 6.50 percent. This level of rates is modestly below the long-term median of almost 7.50 percent, but it is the highest since early in the Great Financial Crisis in 2008. (Rates were briefly a bit higher a few months ago, but not meaningfully so.)

Even if mortgage rates are little changed this year, they will still be at about the highest levels in nearly 15 years and so will not be a positive for housing demand. The Federal Reserve expects to tighten monetary policy further this year, increasing the federal funds rate and continuing to shrink its portfolio of Treasury and mortgage-backed securities. Will this additional tightening put more upward pressure on longer-term interest rates, such as mortgages? Perhaps that will occur in the near term, but if inflation continues to decline and financial markets expect the Fed to reverse course and ease policy, long-term rates may decline later this year. And if the economy falls into recession, a drop in long-term rates is likely – perhaps a sharp one. So, while the current relatively high level of mortgage rates is hurting housing demand, a high probability of falling rates later in the year should be a positive for housing demand. (Of course, this positive can be offset by a sharply weakening job market.)

It is important to separate the new and existing home markets when we look at supply, as they are in very different positions. Housing starts rose to a post-Great Financial Crisis high of 1.81 million units (annualized pace) in April 2022, but declined significantly in the months following. Despite the sharp drop in starts, with the bulk coming in the single-family market (which is mostly owner-occupied), the number of new homes for sale rose steadily over the course of last year. For November (the most recent data available), the number of new homes for sale reached 461,000 – well over the long-term average of about 310,000.

Homebuilders have responded to the drop in new-home sales by reducing housing starts, and this response is likely to continue this year, until new-home sales finally rebound. (It is home sales that drive housing starts, not the other way around.) A factor that may help to mitigate the impact that the drop in demand has on housing starts is that housing units have been undersupplied in recent years. When compared with the number of households in the US, the housing stock is at the lowest level since the mid-1980s. Meanwhile, the rise in mortgage rates over the post-Covid recession period (and especially last year) means that a substantial number of existing homeowners have mortgages with rates that are below (many considerably below) current rates, and the cost advantage of staying put will continue to hold down the number of existing homes for sale. Over time, other factors, such as family composition and job/geographical preference, will naturally cause more homes to be put on the market – but that is a long-term trend that will probably have little impact on the housing market this year.

Although the supply of homes remains low, the drop in housing demand reduced house-price appreciation over the course of last year, with outright declines in some areas (mostly high-cost markets that became increasingly unaffordable in recent years). The slowdown in house price gains coupled with continuing drops in housing demand has led to fears of sharp price declines, especially if the economy falls into recession later this year.

How likely is it that house prices will fall this year? We often compare disposable personal income per capita with house prices to help determine if prices on average are cheap or expensive. Sustainable price gains can’t be much over the pace of income growth, unless mortgage rates decline to offset the hit to affordability – otherwise increasing shares of income go to housing and less to other things; and at the limit, all of our income is spent on houses. We saw this in the housing-boom years, with house price gains substantially above income growth. This trend persisted for several years, enabled by increasing use of mortgage products that lowered payments early in the life of the loan (and gave mortgages to people who were unprepared for homeownership). Of course, it reversed in the housing bust as increasing mortgage payments and rising unemployment resulted in the highest level of mortgage defaults since the Great Depression.

The current period has some similarities to the mid-2000s period but also some significant differences. The rise in housing demand and limited increases in supply resulted in record house price gains in the period after the Covid recession, with price gains substantially above income growth. But the aftermath of the Great Financial Crisis resulted in regulatory changes that greatly reduced the opportunity for inappropriate mortgage products to be a large part of the market. The Mortgage Bankers Association’s Mortgage Credit Availability Index measures the risk of loans that are made each month; and despite the rise in prices reducing affordability, lenders have generally originated loans with little credit risk – especially compared with the housing boom period. Rather than risky mortgage products fueling a surge in housing demand and house prices (as in the housing boom period), the drop in mortgage rates to all-time lows fueled another surge in price-income ratios. But with the recent rise in mortgage rates, this is in the process of ending.

The housing market – and the overall economy – will be healthier over the long run if house price appreciation moves closer to increases in personal income. Will this mean that house prices will fall sharply, as they did in the 2007-12 period, or will we instead see smaller declines or a period of slow gains that allow income to catch up? Factors that argue for steeper price declines are rising mortgage rates, the potential for a recession this year, and the magnitude of the runup in prices in the post-Covid recession period. Factors that suggest that the worst won’t occur are the significantly better credit quality of mortgages originated in recent years, falling inflation and the increased odds of Fed easing and lower mortgage rates later this year, and the low number of homes for sale (combined with a shortage of units overall).

There is significant uncertainty with regard to the path of home prices (and the housing market overall). The most likely course for the housing market is for further declines in activity in coming months (with bigger declines if a recession occurs), followed by a recovery once mortgage rates fall substantially. At a minimum, house price appreciation will slow further in coming months, with a good chance of modest national house-price declines the longer housing demand cools (exacerbated by a recession, if one occurs). But the positives for the housing and mortgage markets noted above should mean that a housing-bust scenario (especially for mortgage defaults and house prices) is a low-probability event this year.