“There is no hunting like the hunting of man, and those who have hunted armed men long enough and liked it, never care for anything else thereafter.” Ernest Hemingway.

Poppies became the official flower of November 11th because of the powerful poem “In Flanders Fields” (https://www.gilderlehrman.org/history-resources/spotlight-primary-source/world-war-i-poems-%E2%80%9C-flanders-fields%E2%80%9D-and-%E2%80%9C-answer%E2%80%9D-1918). 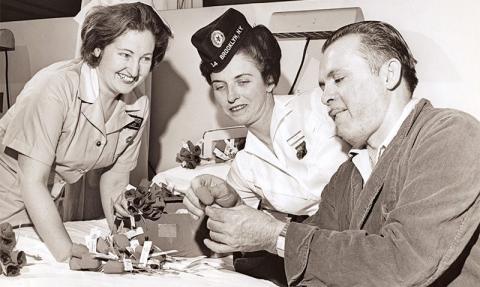 Our American traditions are deeply rooted in war. We honor those who died in war on Memorial Day (originally called Decoration Day and rooted in the aftermath of the Civil War (“Memorial Day,” https://www.history.com/topics/holidays/memorial-day-history).

We honor those who fought and survived on Veterans Day. We also celebrate the beginning of the American War of Independence on the 4th of July. We celebrate the birthday of the nation’s revered first president, a warrior veteran named George Washington. And we remember the president who powerfully spoke at Gettysburg in the midst of the Civil War, urging his listeners “to be here dedicated to the great task remaining before us … that these dead shall not have died in vain — that this nation, under God, shall have a new birth of freedom — and that government of the people, by the people, for the people, shall not perish from the earth.” (“The Gettysburg Address,” https://www.abrahamlincolnonline.org/lincoln/speeches/gettysburg.htm)

So will our nation “long endure,” as Lincoln prayed? This is now a vital question once again in America. What will be the fate of the democracy that so many have died to defend and that so many veterans have survived while defending it? During this post-election uncertainty period we continue to observe the debate dominating our national conversation.

This Veterans Day weekend we want to recommend a book. It is provocative in the way it addresses the question of what lies ahead for us and whether we will long endure. The title is 2034: A Novel of the Next World War (https://www.amazon.com/2034-Novel-Next-World-War).

It took me under two days to read it. For me, it was a “page turner” in the first degree. If you read it, please think about the condition of our world today and include Putin’s declared war on our way of life. In my opinion Putin is waging a war on the entire planet now because he has set back climate change mitigation by a generation and has also introduced a global famine which will unfold for years.

As a kid, I grew up with veterans all around me. I went to decorate graves with my father (WW2, Navy). Family friends included many vets. I watched veterans march in parades on Landis Avenue in Vineland, NJ. I wore poppies and then sold them for a dollar and gave the proceeds to the American Legion. “Buy a poppy, help a vet” were the words I uttered. There was a draft then. Everyone was expected to do what was necessary to help the country. You got to a certain age as a teenager, and you registered with your local draft board. That’s the way it was.

My time as a veteran was with the Army, 1966–1969. I was one of the lucky ones and did not end up in Vietnam. Instead, I served three years on an assignment in Germany. Others I know were in Southeast Asia. Many of them don’t want to talk about it. We have contemporaries who served elsewhere. We are all vets. We may not see each other in person frequently, but we have an immediate bond when we speak with each other or encounter each other in person. That bond of our service to the nation has endured.

I now worry for my country. Maybe that is what happens if you live long enough to see your nation survive crisis after crisis. It’s likely, I think, that former generations of vets — those who survived their service — worried similarly in their later years. Maybe that has always been the case, whether in the recent world wars or after the battles at Thermopylae or Marathon. There were vets then, too.

I worry that we don’t teach history to our younger folks. And I wish we had some type of draft or conscription for a national service requirement (could be combat or non-combatant) that was universal and applied to men and women. Instead, we have two classes of folks: those who serve, survive, and become vets and those who don’t even think about it. Among the classes who serve there are two subcategories. Some come from family or cultural traditions that encourage and honor service to our country. Others see military service as an opportunity to improve their life prospects. Both are important.

What is missing is the “melting pot” that in earlier times gave Americans a common theme of national purpose while maintaining our diversity.

So I worry. Lincoln’s words resonate this Veteran’s Day weekend.