Bonds Round the Corner Toward Home

As we finish the third quarter and round the turn for home in 2021, we are seeing a muni market which has shown remarkable resilience, with demand ongoing throughout the year and yield ratios to Treasuries remaining low as the market continues to expect a hike in the personal income tax rates, which will most likely rise to near 40% for incomes over $400,000.

Below is a comparison AAA tax-free yields and the respective US Treasury yields. As you can see, the yield ratios are a touch cheaper than they were at the end of the second quarter but still rich by historical standards. 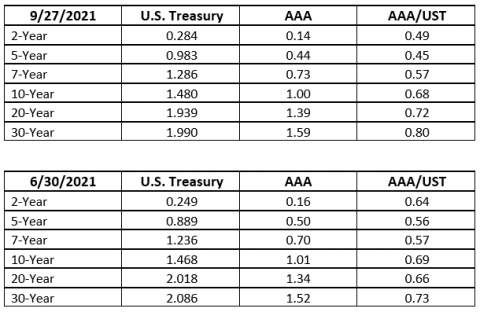 There are two other charts to reference.

One is the ten-year U.S. Treasury bond yield, which we use as a proxy for interest rates in general. The other is the difference between the ten-year bond yield and CORE inflation. 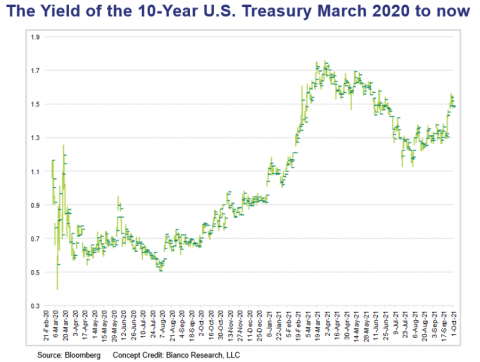 We can see that the first month of the quarter was marked by 10-year yields continuing to decline from the highs of March, which reached 1.75%. A lot of this move was in sympathy with the rise in caseloads of the Delta variant of Covid. Since early August we have seen a rise in the ten-year from the 1.20 range to the 1.50 range as we end the quarter. In our views, this reflects the peaking of the Delta variant, the Federal Reserve announcing plans to taper bond purchases, and the persistent higher levels of inflation that we are seeing. 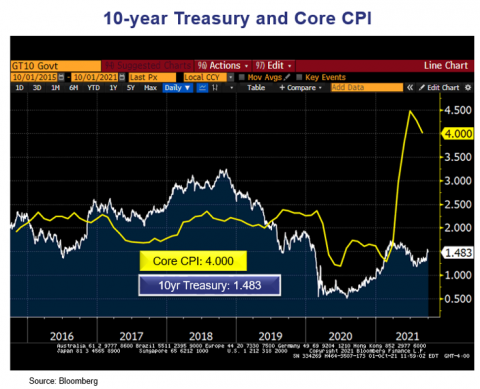 Bond yields have moved up somewhat this month but are still a long way from trailing inflation. It is informative to note that when yields moved up in March, they provided a SLIGHTLY positive yield over inflation (REAL YIELD). That has been long gone as inflation has surged. The monthly inflation numbers are coming down off their highs of late spring/early summer, but we will be looking to see how the longer-term run rate of inflation settles in. There is no question that month-over-month inflation has surprised to the upside, and the market is wrestling with the Federal Reserve’s description of the inflation as transitory versus the market’s increasing assessment of the inflation as more persistent.

The current efforts on Capitol Hill, centering around both the bipartisan infrastructure bill as well the possibility of another Build America Bonds program, speak toward more municipal supply, both tax-free and taxable. Please see our colleague Patty Healy’s piece on this: https://www.cumber.com/market-commentary/infrastructure-plans-muni-market-friendly-provisions.

Another issue which affects the muni market that is intertwined with the spending bill is the resumption of tax-free refundings. This would once again allow municipalities to issue tax-exempt debt to advance refund older, higher-coupon bonds to their first call date. The Tax Cuts and Jobs Act of 2017 eliminated this for municipalities. For most of 2020, beyond the peak of the pandemic, tax-free bond yields were close to taxable bond levels. That meant that municipalities could use taxable bonds for prefunding (this worked for higher-coupon tax-free bonds that were still outstanding). Now, tax free-municipal to taxable bond yield ratios are much lower, so a resumption of tax-free refunding would provide additional cost savings to municipal entities. We think this will get passed and the stated cost for this is a lot lower than estimated, in our opinion.

Also, the SALT provisions of the Tax Cuts and Jobs Act, which limited Federal tax deductions for local property taxes and state and local income taxes to $10,000, is being held hostage by several Northeastern members of Congress. They would like to see this cap removed completely and those taxes return to full deductibility. Politically we think this is a rough hurdle for the Democratic Party, as it will be portrayed as helping the wealthiest of taxpayers, though it helps plenty of middle-class taxpayers in the Northeast and California, where both property taxes and state income taxes are high.