More About the Statistical Discrepancy

My friend Philippa Dunne of TLR Analytics has weighed in on our discussion of the statistical discrepancy in corporate profits, focusing on the GDP side of the issue. Her commentary is below. We thank her for permission to share this effort by Philippa and Doug Henwood. For readers who are just joining the discussion, here is the original note by Michael Drury on the subject: “Statistical Discrepancy: A Mystery about Profits?” https://www.cumber.com/market-commentary/statistical-discrepancy-mystery-about-profits-michael-drury. 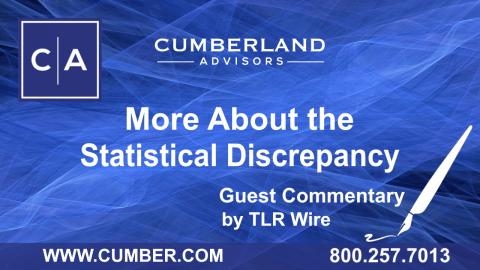 And here is the link to a follow-up commentary on the topic by David Blond: “David Blond Helps Us Understand Statistical Discrepancy,” https://www.cumber.com/market-commentary/david-blond-helps-understand-statistical-discrepancy.

Let me remind readers that the GDP side of this discussion is the source of the profits estimate from which we derive the notion of earnings for the publicly traded companies that are transacted on our stock exchanges. In our present work we are seeing rising earnings trends because we are seeing the profit component of the GDP sustained at a high level. Thus, the statistical discrepancy between the GDP and the GDI becomes an important piece to consider in the management of a stock market portfolio.

During a 2006 Revenue Estimator’s Conference, Jeremy Nalewaik presented his research showing the GDI, the income side of the National Income and Product Accounts, had done a substantially better job at recognizing the start of recessions than GDP—the product side—and suggested we should pay more attention to GDI.

And for a simple reason: GDI incorporates the hard payroll data from the Quarterly Census of Employment and Wages into its second wage & salary revision to the back month, so we see the real picture there first. The replacement of the Current Employment monthly estimates with the hard QCEW data was the source of the 2.0pp upward move in real gross domestic income in the second quarter. Wages & salaries were taken up by $101.3 billion to an increase of $301.1 billion, and it wasn’t one of the “extra Friday” quarters that can shove the percent increases around. Also, the QCEW is a broader measure of wages than Average Hourly Earnings, including bonuses, stock options, and profit distributions, which is why we sometimes say it’s a good measure of inequality of incomes among those who benefit from those additional streams and those who do not. Ordinary wages are up, as are all those other streams, so maybe the current drop in the SD isn’t such a mystery (see snap below).

Spoiler Alert: We generally don’t support the “it will be revised” approach, but that’s still to come for both GDP and GDI, so we’ll see what happens on Wednesday. Nalewaik notes that there is no way to forecast revisions to GDI.

In his paper, Nalewaik also noted that his Markov switching models have, over the last decades, moved somewhat away from the traditional definition of a recession, and increasingly define the low-growth phase as an extended period around zero instead of an outright decline. He suggests this was driven by the, then, two last jobless recoveries, and that the low-growth periods in the switching models are substantially longer than those identified by NBER as recessions. In a later revision, he and Dennis Fixler argued for weighted models that incorporate both measures, and suggested we might reframe some of the “idiosyncratic variance, generally treated as noise and “bad,” as “news or pure news,” and a “good.”

In a 2007 BEA paper, named simply, The Statistical Discrepancy, Bruce Grimm notes that the statistical discrepancy is not caused only by shortcomings in the data, but by differences in other factors, like seasonal adjustment, different extrapolation techniques,  and he notes the convention of computing the discrepancy as GDP less GDI is based in BEA’s belief that the 7 sources that go into GDP are “generally more reliable” than the 10 that go into GDI.

In a redo of an earlier study, BEA followed the discrepancy between 1920 and 2004, choosing that stretch because both periods of high inflation and of inflation below 4% are included. They broke out 1970-1983, and 1984-2004, the latter period “far more interesting” according to Grimm. In the first period, coefficients for GDP, GDI, and 21 of 26 income & product components were statistically significant; in the post-1984 period, only 3 components were significant. That suggested to the research crew that the high number of significant components in the earlier period in the size of current-dollar measures could have come from high inflation, and further testing supported that hypothesis.

Maybe the current bout of inflation is messing with the numbers, as may be the gyrations of the last year and a half: nominal GDP is 19% above its 2020Q2 low, GDI up 15%. Those moves could surely whipsaw the relationship between output and income.

All the papers note that GDP is a flawed measure, and there are many flaws from which to choose. Yale economist William Norhaus notes that we count new home construction in GDP, but not the houses engulfed by wildfires, or the social costs of carbon, about $233.2 billion in 2018 whose spillover effects might well be subtracted from GDP. But, in a 2011 study he and his colleagues found that price damages of five major pollutants fell from 6.9% of output in his Net National Product to 3.4% between 1999 and 2008, which lifted growth rate from 2.0% a year to 2.5%.

Others argue that the efforts we make to improve our health, or home cooking, and gardening should count for something. That ain’t going to happen, but nurseries and seed companies are still running short, and out, of food crops. Maybe all that pandemic baking, and gardening, for those who can, are pushing the discrepancy around as well.

The commentary above comes from Philippa and Doug’s excellent daily research note, TLRwire, which I read daily upon receipt. Here is how to subscribe: https://www.tlranalytics.com/category/tlr-wire/.