Geopolitical risks, inflation, and recession risks continued into the end of the year, highlighted by announcements of major layoffs at tech and finance companies. Supply chain disruptions eased some, and demand for services increased while consumption of goods declined. Many areas of the economy, including state and local governments, schools, and healthcare continued to have trouble attracting employees. 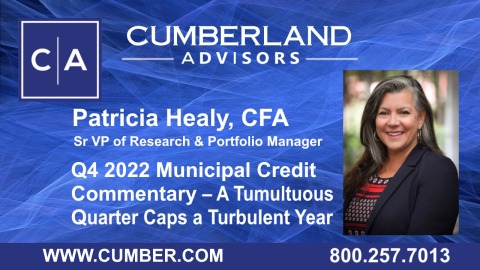 The stock market continued its decline, while the month of November brought positive returns to fixed income. See John Mousseau’s commentary “Bonds Roar Back.” Poor stock and bond performance had a negative effect on savings, potentially causing folks to postpone retirement or consider re-entering the workforce. David Kotok, in a recent commentary 50 Years: Longer, Healthier, Happier, has mentioned the 50% tax on Social Security earnings in excess of a certain amount that may deter some younger Social Security recipients from re-entering the workforce. He and many others have called on the federal government to reconsider this tax treatment in order to help with worker shortage.

Munis expected to have stable credit quality
While upgrades outpaced downgrades in 2022, we expect an even more stable rating environment in 2023. Most sector outlooks are stable now that airport, port, and toll road positive outlooks have been changed to stable. The healthcare sector and private higher education have negative outlooks, given the difficulty in hiring and resulting higher wages, evaporation of pandemic stimulus funds and policies, and demographic changes, especially for private higher ed. All munis will be challenged by the expected slowdown in the economy; however, stability should come from factors we have repeatedly mentioned, such as healthy levels of accumulated reserves, better budgeting and fiscal management, well-established rainy-day funds, improved pension management, good revenue growth, and improved property tax bases and sales taxes that are positively affected by inflation. Infrastructure funding may reduce the amount of debt some munis need to finance projects. There are outliers. Many jurisdictions have improved pension funding, but for a few issuers, such as Chester Co. PA and Milwaukee, WI, it is causing outsized problems.

State Ratings
Q3 was a relatively busy quarter for state rating actions — in Q4 there was one rating change and a couple of outlook changes.

In November, the State of Connecticut was upgraded to AA- by S&P because of sustained positive financial results and its demonstrated commitment to reducing its high debt and retirement liabilities.

Moody’s lowered its outlook on the state of Hawaii’s Aa2 rating to stable from positive, a change which recognizes the state’s dependence on tourism and how inflation could impact travel, countered with the expectation that the state will be proactive in its financial management.

Moody’s raised the outlook on the State of Ohio’s Aa1 rating to positive from stable. There is growing evidence of new economic development that could diversify the state's economy, improve growth, and strengthen demographic trends over the medium term. The change also reflects recent improvement in the state's financial position.

Rating methodologies
Moody’s Essex County, NJ, GO rating went from Aaa to Aa1. The county’s credit quality did not change, but the way Moody’s evaluates and weighs credit factors did. Moody’s updated its methodology for rating cities and counties in Q4. However, Essex County did not measure up under the new methodology, resulting in the downgrade. In an effort to be transparent with the market in advance of rating changes, Moody’s stated that it expected 252 ratings to be upgraded, 93 to be downgraded, and 1600 to be unaffected.

In November, the agency noted that the new methodology equally weights the economy, financials (fund balance and liquidity), and leverage at 30%, while institutional framework is weighted 10%. Institutional framework refers to legal and statutory structure, including diversity of revenues and the amount of control the municipality has over its operations. This new methodology focuses more on muni credit drivers and less on specific security pledges. There are many statistics and ratios evaluated in each category. We note that there are no ESG factors mentioned in the methodology; however, we know that Moody’s does look at ESG risks when reviewing credits.

Single ratings
When we review a bond issue, we note if the credit has only a single rating. There are a few reasons that we do this. The rating could be subject to a “rating cliff” if the methodology of the single agency changes, while if there are two ratings, one can act as an anchor. Additionally, the bonds of the issuer may not trade as well or be as liquid as others with two or more ratings. Or having only one rating could indicate budgetary pressures at the muni. Finally, the issuer with more than one rating is subject to more rating agency reviews, providing more information to the market.

It is good to have competition between the rating agencies. Although the industry has become more regulated since the financial crisis of 2007–2008, each rating agency tries to differentiate itself on the criteria it views as important. Rating agencies have access to muni management and employ analysts steeped in specific sectors in order to bring to bear a strong understanding of dynamics and trends. While this access may breed familiarity with the issuers, the information that rating agency analysts glean and report on is generally insightful and important to investors. Rating agencies need good reasons to take a rating action and sometimes need to wait for data to be released and analyzed, while investors can move ahead of what they think the numbers may show, potentially giving themselves an advantage in selling or buying bonds before a rating action can occur.

Municipal Markets Analytics (MMA) notes in a recent report that with the Moody’s methodology change for cities and counties, Moody’s and S&P ratings will be more aligned.

We often discuss Moody’s and S&P ratings, but we also pay attention to Fitch and Kroll Bond Rating Agency (KBRA) bond ratings, too. KBRA is a relative newcomer to the rating agency business and does not rate as many entities as S&P or Moody’s does. However, to differentiate itself, it provides detailed analysis and highlights different points of view; and that is another check and balance for Cumberland.

Muni bond insurance developments
Insurance is more in demand during times of credit stress and recession, and in a higher-interest-rate environment it can provide greater interest-rate savings to municipal issuers. While yield for investors would not be as high without bond insurance, the low probability of default for both the muni and the insurer provides additional safety and liquidity to insured bonds held. The two major insurers serving the muni bond market are Assured Guaranty Municipal Corp (AGM) and Build America Mutual (BAM). Both are rated AA by S&P. AGM is also rated by KBRA at AA+ and by Moody’s at A1. An important development for AGM was the resolution of most of Puerto Rico’s defaulted debt, removing uncertainty from the insurer’s book of business. As promised, AGM paid bondholders principal and accrued interest on Puerto Rico insured debt. By contrast, many noninsured bondholders had less than 100% recoveries. BAM began business in 2012 as a muni-only mutual insurance company and does not have Puerto Rico exposure.

We are very comfortable with both AGM and BAM. Their insured portfolios are diverse, with few large single-risk exposures; investment portfolios are high-quality; capital levels are strong; underwriting is rigorous; and insured portfolios are regularly monitored, allowing the bond insurer to be ahead of credit problems in the portfolio and to encourage issuers to act to alleviate problems. Most of the insured bonds are of investment-grade quality, albeit in the single-A and triple-B rating categories. However, as we noted in our last quarterly credit commentary, investment-grade munis have a very low default rate (see “Q3 Credit – Despite Inflation and Other Challenges, Most Muni Sector Outlooks Still Stable.”

Outlook for 2023
We expect the credit quality of municipal bonds to be stable overall. We also expect 2023 to be an eventful year, with many developments. The changing of the guard in the House of Representatives, albeit by a narrow margin, will likely curtail large spending programs that some have become accustomed to. Event risk in the form of a rollback or denial of federal aid, cyber threats, and extreme weather need to be monitored, as well as munis’ attention to addressing these risks – this is a management or governance analysis. The trend towards greater transparency is a positive one that will help citizens and investors alike understand the community they live or invest in. Municipalities, with the passing of the omnibus bill, are now required to work towards machine-readable and more consistent reporting. Blockchain and AI are changing many industries, and developments in underwriting and trading muni bonds will likely occur over time and reduce costs – after some disruption.

At Cumberland we take a top-down approach to analysis; but as the economy weakens not all boats will float, and we will watch for signs of deterioration in certain sectors and credits. Most of our muni bond holdings are rated in the double A category, which indicates stability. AA-rated credits generally have a wealthy and diverse economic base, strong financial operations, reasonable debt levels and a manageable pension liability, as well as proactive management.

I wish all our clients and readers a Very Happy New Year.