Q4 2021 Credit Commentary – It Feels Like a Never-Ending Story

The intro to the credit commentary we wrote last quarter could be put right here, with Omicron inserted in place of Delta – the latter variant had threatened our recovery with more shutdowns of the economy to protect folks. See "Q3 2021 Credit Commentary – Continuing Recovery or Challenges Ahead?" | Cumberland Advisors. Omicron is making people less sick generally than Delta does; however, it is affecting many more people and disrupting travel, healthcare, policing, teaching, service industries — and the list goes on — because of the large number of folks who cannot go to work because of positive testing and illness. This disruption was especially difficult during the holiday season; however, the Omicron spike is not expected to last as long as the Delta spike did; and as we have all heard, quarantine times have been shortened if people are symptom-free. We are growing accustomed to living with the virus; and as the pandemic runs its course and more folks get vaccinated and boosted, everything should become easier; but there may yet be more variants to adjust to in the future. 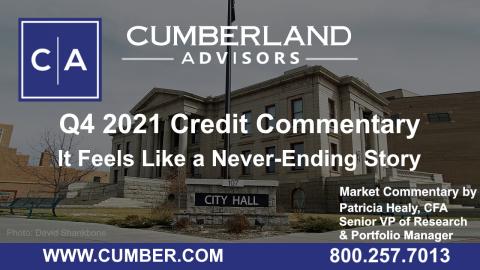 Last quarter we mentioned the prospect of higher inflation from stimulus, the strong economy, and supply chain disruptions. In his quarterly piece, John Mousseau discusses inflation, Fed action, and the potential effects of not passing the Biden Build Back Better Plan on rates and bond supply: "Heading Towards Home in Bonds" | Cumberland Advisors.

President Biden signed the $1+ trillion Infrastructure Investment and Jobs Act (IIJA), AKA as the Bipartisan Infrastructure Law (BIL) on November 15th. It includes $550 billion in new funding and the remainder from funding already in place for infrastructure, i.e. federal highway funds from gas taxes and others. The program is for roads, bridges, railroads, airports, electric, water, sewer, and broadband. It includes some new efforts to address electric grid resiliency, electric vehicle charging, and broadband for all. The legislation also increases the private-activity bond cap, which allows some projects that normally would not be, to be funded on a tax-exempt basis.

The funding may increase the supply of municipal bonds because it may come in the form of grants to be paid in future. Thus, municipalities can issue bonds dependent on the future receipt of federal funds — grant anticipation notes. Sometime the funds come as direct aid and require a municipality to match a certain amount of funds, and they could issue bonds to meet that match. Other municipalities have capital plans in place, and the federal funding contribution could lower the amount of bonds issued for projects.

Weather events of the past year, including Q4, have presented challenges to our infrastructure and to our psyches. Ice storm Uri in Texas was particularly devastating and a wake-up call regarding the reliability of electrical equipment in extreme, unexpected cold. Many utilities’ bond ratings were put on watch or downgraded by rating agencies because of the storm’s destruction and resulting expected increases in debt leverage and consumer rates.

Just last week, fires engulfed a whole community northwest of Denver; and last month tornadoes wreaked havoc and loss of life in the Midwest and South, resulting in the declaration of states of emergency, which, in addition to highlighting the level of a disaster, also entitle communities to federal disaster relief. The federal relief helps communities rebuild and bond ratings to be maintained or not to suffer drastically. However, some areas may experience slower growth or movement away from climate event-prone places, caused either by governmental restrictions on growth or the desire of families to be safe. Such developments can put longer-term pressure on bond ratings.

Even as some governments in Europe receive pushback regarding lofty transition goals away from coal (some timelines to net-zero emissions are being extended), tracking and evaluating environmental, social, and governance risks and mitigation efforts are ramping up in the muni market. The National Federation of Municipal Analysts (NFMA) and other groups are working on a common ESG terminology. In December, Bloomberg announced the launch of the Bloomberg US Municipal Impact Index, which tracks muni bonds categorized as “green, social, and sustainable.” These tax-exempt bonds are either self-labeled in an initial offering reviewed by an independent verifier or are required to use 100% of proceeds for a project in line with the standards of the International Capital Market Association (ICMA). There are subindices for green, social, and sustainability bonds, which will help track demand and performance based on those impacts. Low rates and narrow spreads make it less definite that investing in ESG bonds will provide better performance, so these indices may help measure relative performance in the future as interest rates rise and spreads widen. Many investors want to see positive social impacts, too, such as affordable housing and improved education, so measurement of those factors is expected to increase as well.

There was one state rating action this quarter, following a busy third quarter. S&P, after upgrading the State of Illinois to BBB stable from BBB- in Q3, raised the state’s rating outlook to positive in Q4 based on its recent strong revenue performance, ongoing economic recovery, and transparency of budget reporting — all items that could help the state to maintain a positive rating trajectory.

Pension Funding continues to be a long-term concern, but progress has been made.

Illinois has one of the worst-funded pensions, with a funded level of only 38.9%; however, the state has made inroads and has recently consistently made annual contributions. Kentucky (39.7%), New Jersey (44.6%), and Pennsylvania (58.0%) have also made progress, along with numerous other states, according to a report from Pew Charitable Trusts (“The State Pension Funding Gap: Plans Have Stabilized in Wake of Pandemic.” Notably, the average funded rate for states is 80%. Most states are paying annual benefits and funding contributions to pension funds such that the funded status is moving in a positive direction. Moody’s uses an adjusted net pension liability (ANPL) measure to provide comparison among states, and in 2020 the ANPL rose but is expected to decline (that is, to improve) in 2021 due to higher investment returns as well as improving state revenues and stimulus funds.

In November S&P chimed in on city pension funded levels. Cities too have pension funding problems; and not surprisingly, with its debt rating of BBB+/ Ba1/BBB- by S&P/Moody’s/Fitch, Chicago is the biggest culprit among cities, with a funded level of 22%. However, the city has been making large annual contributions to help improve the funded level. Overall, the 20 cities reviewed have an average pension funded level of 71.5%, similar to the level of the past couple of years. S&P anticipates that funded levels for 2021 will improve due to strong investment returns.

Faltering investment returns, undisciplined management, a shrinking number of employees supporting a growing number of retirees, natural attrition, and longer lifespans all affect a state’s ability to fund pensions. The exodus of folks from high-tax states that have large numbers of retirees could also put stress on some pension funds.

Cumberland Advisors invests in safe sectors and highly rated muni bonds for our tax-exempt strategies, and we include taxable munis in our taxable strategies.

Today, all muni sectors have stable or positive outlooks, except higher education, which has a negative outlook by S&P, and healthcare, which has a negative outlook by Moody’s. Both sectors are dependent on people congregating and working in close quarters. Healthcare has especially been affected by supply-chain and labor disruptions. Moody’s has positive outlooks on ports, airports, and toll roads, given the good increases in usage and strong cash balances and operations prior to the onset of the pandemic. In an example of how some local governments are positioned, convention center and hotel improvement and expansion bonds are being issued by cities that are confident there will be a return to large-scale in-person events.

The stable sector outlooks reflect the improving economy, federal stimulus, strong revenue collections, accumulating reserves, and disciplined management. The duration and evolving nature of the pandemic and concerns about inflation and the economy, as well as longer-term trends such changing demographics and climate adaptation efforts will present challenges; and management’s response to the challenges will affect the direction of future outlooks.